The TLS review of Good People

An interesting review about Good People in Times Literary Supplement
“Good People chillingly captures the terrors and tensions of life under Stalin and Hitler.”

Good people review in the Economist.

The Economist with a great review on Good people:
“Not monsters or even cynics, he answers in a pacey, plot-heavy novel of dramatic events and big ideas, but gifted storytellers fuelled by ordinary motives of love, loyalty or ambition. Blessed or cursed by the “elasticity of the human soul”, they wield this suppleness of spirit as “the hidden hand that smoothed out every wrinkle in the flag of truth”

Nir Baram in “Meet the Author” in the Guardian

Nir Baram in “Meet the Author” in the Guardian: How do we work and live in a society that we consider unjust?

This book looks at the second world war from the perspective of two characters, Sasha and Thomas, who collaborate with Stalin and Hitler respectively. What interested you about that subject?
“In Israel, the second world war and the Holocaust are something you grow up with. At school, in the army, you sometimes feel that the Holocaust is shoved down your throat. But in literature you tend to come across the usual character types: either the bureaucrats such as Eichmann, or the highly perverse caricature of a Nazi. In contrast, I wanted to look at the role of brilliant and creative people, kind of “free spirits”, who happened to find themselves living under those regimes. Sasha, for example, may not agree with the objectives of the NKVD, but working for them provides her first chance to shine, and an opportunity to realise her talents.”

“Exactly the kind of intellectual novel that will get you through a summer spent chain smoking in Berlin cafes…”The story follows Berliner Thomas and Sasha of Leningrad as fate brings them together, just as it does their leaders, Hitler and Stalin. The sparks from this flint are determination, willpower, and, as the years go on, horror at what those virtues cost. In the end, though, Good People ultimately returns to Germany, although it is a place entirely changed from that which started the novel. The wrenching prose and plot has earned young Israeli author glowing comparisons to Dostoyevsky and Grossman. “How does a man in his early 30s know how to write like this?” Helen Elliott marveled.”

Chapter from “Good People” appears in the Guardian newspaper:
“Good People is a globe spanning, wide-canvassing novel that probes the depths of one of history’s darkest hours. With riveting narrative force, based on thorough historical research, this extraordinary novel spans World-War II Europe across time and space, boldly sketching an unflinching portrait of men and women and their times. In the extract presented below, our protagonist, Thomas Heiselberg, a Berliner, discovers a Jewish woman violently murdered in his home.”

Review By the writer David Hill The New Zealand Herald

“Baram narrative anatomises the malleability and fragility of truth, during lives of monstrous brutality and incoherence. Order is ephemeral; chaos is always just a falter away. Meaning and morality are quickly twisted. Unrelenting and undeniable, this is a savage, sometimes horrifyingly comic, autopsy on the warping of once-decent people.”

Review in the New Zealand Listener: “The chilling irony of that thought is its self-reflexivity. In Baram’s fatalistic, labyrinthine Stalinistic universe, the game will always be up and there will be no escape for anyone.”

With the publication of Good people in Australasia Nir Baram has been a guest in the Sydney Writers’ Festival and among other events participated in the panel “Madness and Malevolence: History Through Fiction” with Marlon James (winner of the 2015 Man Booker Prize) and Álvaro Enrigue.

A review in The Age by Andrew Riemer: “Good People is a richly textured panorama of German and Russian life and society in the years leading up to the violent (and predictable) collapse of the Russo-German peace pact… This ample novel lives most memorably through Baram’s vignettes of people, dwellings, cities, landscapes and the like that seem to lie, at times, at the periphery of its central concerns.”

“Most alarming is how timely and universal the book’s themes are.”

First review in Australia: “How does a man in his early 30s know how to write like this?”

First review for Good people in Australia was published in the national newspaper “The Australian” by the known reviewer Helen Elliott :”This is not a flawless novel but it is tremendous. I read it in two sittings and I learned a lot. How does a man in his early 30s know how to write like this?”

In 2016 Good People will be published in US, UK and Australia. In its January issue the magazine the White Review publish a chapter from the new English translation – the new year’s eve party in the NKVD branch in Leningrad, in a few hours it will be 1940…

Good People on the front page of El Pais

A different Israeli literature is possible

There is something intensely challenging in Nir Baram. in his work and his personality. In rebellion, he has done something that only an Israeli without fear can do. He has offered his country a novel portraying the pre-World War II horrors so disturbing: without portraying monsters or tell their bloody crimes, leaving barely seen the death of millions. Good people in Baram’s novel subject the course of history by two special human beings, full of talent and sensitivity. They tempt the reader with their fascinating personalities, and tragically end up choosing to be collaborators of the great evils of the twentieth century by a cruel and soulless opportunism. Their decisions have devastating effects and engulf themselves and the dignity of an entire generation.

To the full on-line article: 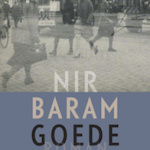 The NRC, Nederland leading newspaper, published its selection for the best 50 novels of the last 5 years: Barams novel was chosen with books by Bolano, Franzen, Murakami, John Williams and others

At the 13.11 Nir Baram had a reading in Berlin with the German writer Olga Grjasnowa. Baram read from his novel “Good people” and Grjasnowa read from her new novel in German “Die juristische Unschärfe einer Ehe”

“Review In English in the Buenos Aires Herald

“The critical praise which have been showered on this book is like a writer’s wildest dream. A German newspaper said, “Dostoyevsky would write like this if he lived in Israel today.” Except that feelings of guilt are, as explained, less of an issue than careerism, it isn’t too much of an exaggeration. In its specifically Stalinist setting, Solzhenitsyn also comes to mind.”

Another 5 stars review in one of Denmark leading newspapers

Five stars and great review about “Good People” in one of Denmark most important newspapers: Berlingske…

“What would we have done if we did live in that part of the world? It is inevitably a recurring question while reading Nir Barams masterful novel ‘Good people’. In his beautiful novel of two main characters and a host of other tragic secondary characters – give the Israeli writer Nir Baram a vivid depiction of life under Nazism and Communism in 1930s. The novel is a freezing depiction of moral decay…”

Review in the Argentinian La Nación