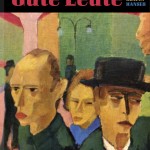 “Good people” depicts accurately and with great talent and vast historical research the roll of regular people, “Fine People”, who served the Nazi regime but did not see themselves as supporters of the Nazi ideology. In particularly the novel describes the roll of those well educated senior officials who served the Nazi regime and advanced its plans while claiming they are defending the honor of Germany.