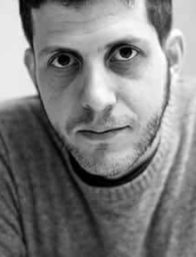 Nir Baram was born into a political family in Jerusalem in 1976. His grandfather and father were both ministers in Israeli Labor Party governments.

He has worked as a journalist for Harretz newspaper and as an editor of Non fiction books and classic novels in Am-Oved publishing house. Baram is also an advocate for equal rights for Palestinians.

He began publishing fiction in his twenties, and is the author of ‘The Remaker of Dreams’ (2006), ‘Good People’ (2010) and ‘World Shadow’ (2013). His novels have been translated into 13 languages, were best sellers in Israel and in different countries and received critical acclaims around the world. In the prestigious German newspaper, “Frankfurter Allgemeine Zeitung”, Baram was described : “Quite possibly, Dostojewski would write like this if he lived in Israel today”.

He published stories and articles in The New yorker, Granta, El pais, Der Spiegel, NRC, Haaretz and other Magazines.

Baram has been shortlisted several times for the Sapir Prize (the Israeli Booker), for Rome prize for foreign literature and in 2010 received the Prime Minister’s Award for Hebrew Literature.

In 2016 his non fiction best seller book, A land without Borders””, describing his one year journey into the West Bank and East Jerusalem, was published both in Israel and other countries. the book was a best seller and the documentary made by Nir Baram with the same title won the Israeli Oscar and was watch by more then  120000 people.

In 2018 Baram published his most personal novel: “At nights end” considered by many in Israel as Baram most successful and best novel. The Book received raving reviews,  was number 1 in the best seller list and was shortlisted to Sapir Prize.