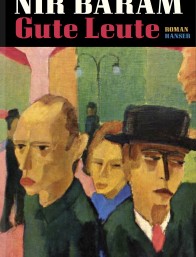 It’s 1938 and Thomas Heiselberg, a Berlin adman, master of disguise and hustler of fleeting alliances, has set out to be a great man. As a new wind sweeps across Germany, Thomas finds that he must put his rare knack for selling into the service of the Third Reich. Meanwhile in Leningrad, Alexandra Weiesberg, the young daughter of a Jewish intellectual, is about to be faced with a heinous choice: Her parents will shortly be condemned as enemies of the people and they are, she realizes, as good as lost. To save her young siblings from similar fate, then, she must make a pact with the very regime that brought ruin upon her family. Thomas and Alexandra are propelled by a kindred mechanism: they both feel themselves to be perpetrators of a lesser evil. At the eve of the outbreak of war between Germany and the Soviet Union, the two of them conjure up an outrageous plan that may change the course of history. Their fatal meeting will put them face to face with the moral choices they’ve made and their consequences.

Good People is a globe spanning, wide-canvass novel that probes the depths of one of history’s darkest hours; its heroes are those members of the educated middle classes who sit behind office desks. With riveting narrative force, based on thorough historical research, this extraordinary novel spans World-War II Europe across time and space, boldly sketching an unflinching portrait of men and women and their times.

“Good People” is the first novel written by an Israeli author which tackles the Second World War from the perspective of the collaborators. The novel received critical acclaims and aroused a long public debate. It was short listed for the Sapir Prize (the Israeli Booker), the Roma Prize Award (Premio Roma) for foreign literature and was also chosen as one of the best 25 translated novels in the last 5 years in the Netherlands by NRC newspaper. Good People sold 35,000 copies in Israel.